After the support period has expired, the repository is moved to another server and will no longer be available in the standard location. 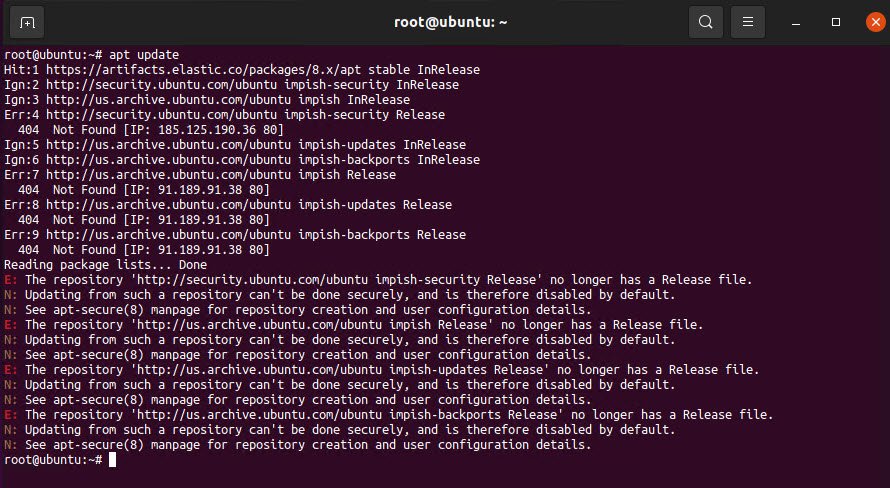 If you encounter it, the full error message and notice messages may look something like this.

E: The repository “———” no longer has a Release file.
N: Updating from such a repository can’t be done securely, and is therefore disabled by default.
N: See apt-secure(8) manpage for repository creation and user configuration details.

For example, the example output above indicates that the user is trying to install or update impish-backports on Ubuntu Impish, which the repository haven’t been updated to support. As such, its repositories can no longer be found on the mirrors, so if you want to continue using this version, you need to use old-releases.ubuntu.com as your mirror.

Be aware however, that there will be no more upgrades for Impish, so you might want to switch to a supported version. The easiest way to upgrade is to run this command: do-release-upgrade

To fix this 404 issue, you need to run the following two commands which will update your APT sources to use the “old-releases” versions of the packages.

Here are the commands:

After that, you can run “apt update” and “apt upgrade” command.

The apt update command is now working as expected!

After successfully updating and upgrading the system. Type the command given below to install the Curl on your Ubuntu system.

Curl can be installed from the official APT package repository of the Debian Operating system.

Alternatively, you can also try to upgrade the Ubuntu version, which will update sources for apt-get as well. To update, run the following command:

How To Install Palo Alto GlobalProtect VPN in Windows

11 Google Analytics Tricks That Will Change the Way You Think

Security Awareness and User Training – Why Is It So Important In 2022?

Understand the Difference Between Telnet and FTP